March 16, 2022 The Carter to Present Seven Installations by Contemporary Artists Visualizing Ideas of Emancipation 160 Years in the Making 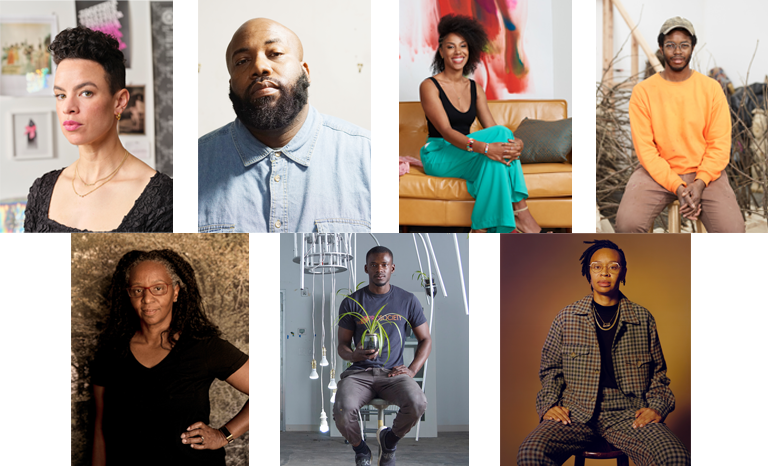 In dialogue with historical artwork from the Carter and museums across the country, Hugh Hayden, Letitia Huckaby, Jeffrey Meris, and others to mark Emancipation Proclamation milestone in Emancipation: The Unfinished Project of Liberation

Fort Worth, TX, March 16, 2022 (Revised November 17, 2022)—In conjunction with the 160th anniversary of the Emancipation Proclamation, the Amon Carter Museum of American Art (the Carter) will present newly commissioned and recent works by Sadie Barnette, Alfred Conteh, Maya Freelon, Hugh Hayden, Letitia Huckaby, Jeffrey Meris, and Sable Elyse Smith in a new exhibition visualizing Black freedom, agency, and the legacy of the Civil War in 2023 and beyond. The seven installations featured in Emancipation: The Unfinished Project of Liberation—spanning sculpture, photography, and paper and textile fabrications—will react to the legacy of John Quincy Adams Ward’s bronze sculpture The Freedman (1863) from the Carter’s collection and will highlight the diversity of materials and forms in sculpture, installation, and mixed media today. Co-organized by the Carter and the Williams College Museum of Art (WCMA), the exhibition demonstrates how historical art collections can be a resource and inspiration for contemporary artistic practices. Emancipation will be on view at the Carter from March 12 through July 9, 2023, before traveling to Newcomb Art Museum of Tulane University, WCMA, and Telfair Museums.

Seeking a deeper understanding of what freedom looks like for Black Americans after 160 years, Emancipation interrogates the role of sculpture in American life by bringing the perspectives of contemporary Black artists into dialogue with the multi-faceted form and content of Ward’s The Freedman. Initially envisioned and sculpted by Ward before the end of the Civil War, the figure is depicted on the cusp of liberation, with bonds ruptured but not removed. The work is one of the first American depictions of a Black figure cast in bronze, and the Carter’s cast from 1863—dedicated to the 54th Massachusetts Regiment, an all-Black infantry unit—is the only copy of its kind with a key that releases a shackle from the figure’s wrist. While considered aspirational in its time, over a century and a half later, The Freedman’s reflection of uncertainty and endurance seem to manifest the long reach of American slavery. Contextualized by a selection of other Civil War-era works from the Carter; the Museum of Fine Arts, Boston; Saint-Gaudens National Historical Park; and other collections, the figure’s contemporary resonance issues a prompt for portraits of freedom, imprisonment, corporality, personhood, and power in 2023 to inform the next century.

“Emancipation exemplifies the Carter’s dedication to cultivating open conversations on the complexity of American artistic creation both past and present,” said Andrew J. Walker, Executive Director. “By critically engaging the layered history of iconic works from our collection, such as The Freedman, we give the work new life through contemporary perspectives on racial inequity, conflict, and representation while forging avenues for living artists to meaningfully shape future dialogue through artistic intervention.”

The seven living artists represented in Emancipation were each invited to explore The Freedman through the lenses of their own lives and the multiplicity of meanings those contexts create for the form of emancipation.

“As a curator, I’m tasked with unlocking the multiple meanings artworks accumulate over their lifetimes, but I hold the firm belief that historical works find their true potential in the hands of contemporary artists,” said Maggie Adler, Curator of Paintings, Sculpture, and Works on Paper at the Carter. “The Carter is committed to fostering the efforts of living artists whose work resonates with history, and Emancipation is a case study in the new creative possibilities that can be realized by seeking inspiration from historical collections.”

“This exhibition is timely since Americans are reckoning with history and how to interpret the impact and after-effects of slavery,” said Maurita Poole, Executive Director of Newcomb Art Museum and co-curator of Emancipation. “The contemporary art breathes new life into the notion of emancipation and hopefully will encourage audiences to reconsider their perspectives about freedom and full citizenship in the United States.”

Emancipation: The Unfinished Project of Liberation is co-organized by the Amon Carter Museum of American Art and the Williams College Museum of Art. The exhibition is co-curated by Maggie Adler, Curator of Paintings, Sculpture, and Works on Paper at the Carter, and Maurita Poole, Executive Director of Newcomb Art Museum, Tulane University.  The Carter’s presentation of Emancipation: The Unfinished Project of Liberation is supported by the Leo Potishman Foundation and the Alice L. Walton Foundation Temporary Exhibitions Endowment. The exhibition will be presented with a companion book, co-published with the University of California Press, featuring Q&As with the exhibition’s seven contemporary artists and essays by Kelvin L. Parnell Jr. (PhD candidate, University of Virginia, Department of Arts and Sciences); Kirsten Pai Buick (professor, art history, University of New Mexico); Andrew J. Walker (Executive Director, Amon Carter Museum of American Art); Thayer Tolles (Marica F. Vilcek Curator of American Painting and Sculpture, Metropolitan Museum of Art); Pamela Franks (Class of 1965 Director, Williams College Museum of Art); and the co-curators, Maggie Adler and Maurita Poole. The book will also include a short story by N. K. Jemisin (Hugo Award-winning Black science fiction/fantasy writer).