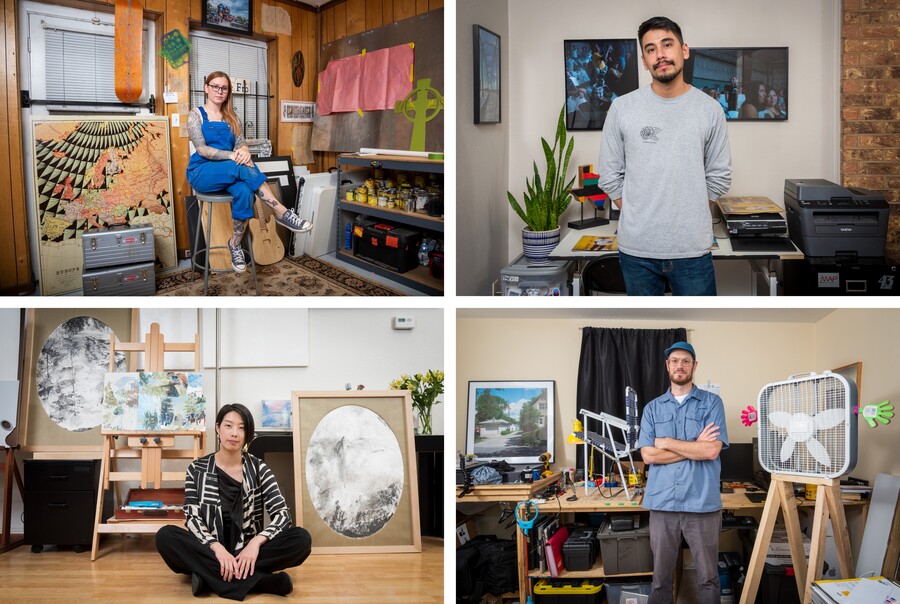 Fort Worth, TX, September 18, 2019 — The Amon Carter Museum of American Art announced today the 2019–20 Carter Community Artists: Sarah Ayala, Raul Rodriguez, Lingchia Tsai and Blake Weld. The Carter Community Artist initiative was established in 2018 with the goal to work with and support local artists to create opportunities for the North Texas community to connect with the museum’s collection and artists in the region. This year’s artists each bring a unique perspective on, and compelling connections to, the museum’s collection and exhibitions during their October 2019–September 2020 role as a Carter Community Artist.

Sarah Ayala explores concepts of repetition and meditation, traditional gender roles, and her Latinx culture. Documentary photographer Raul Rodriguez uses his camera to highlight subcultures and social issues relevant to Latinx communities. Influenced by Chinese poetry and philosophy, Lingchia Tsai is interested in the symbolism of natural elements and expressive mark-making. Blake Weld combines sculpture and performance art, using everyday items to design absurd objects that move and perform simple tasks. These themes exploring of playfulness, highlighting communities of color and reimagining what it means to create American art are also evidenced in the rehanging of our permanent collection galleries and our special exhibitions like Puente Nuevo by Justin Favela, Gordon Parks: The New Tide, Early Work 1940-1950, and Set in Motion: Camille Utterback and Art That Moves.

“This year we are pleased to be welcoming four new artists from DFW to continue building upon the foundation we established in the inaugural year of the Carter Community Artists initiative,” said Jessica Fuentes, the Manager of School and Community Outreach at the Carter. “The work our artists have done, and the new class will continue to do, with students, visitors, and teachers has provided a pathway for new or, in some cases, a first, connection with art.”

“The Carter Community Artists initiative is a critical part of the museum’s community outreach, and we have seen so many wonderful connections and programs created during our inaugural year with artists Christopher Blay, Lauren Cross, Diane Durant and Arnoldo Hurtado,” stated Amanda Blake, Director of Education, Library, and Visitor Services at the Carter. “These artists interacted with more than 2,000 participants of all ages during 50 programs over their year with the Carter, both at the museum and in the community. We look forward to opportunities for continued collaboration with our Carter Community Artist alumni group.”

Along with welcoming the new class of Carter Community Artists, this year the Carter is launching expanded programming for audiences of all ages and growing our reach outside the museum walls. The museum’s collaboration with the new class of artists will be crucial to creating meaningful experiences with audiences new to the Carter.

About the 2019–20 Carter Community Artists

Sarah Ayala lives and creates in the Fort Worth Cultural District where she was raised. She is an artist rooted in community who aims to make art more accessible to the public. Sarah’s work draws inspiration from world religions and philosophies as well as her Latinx culture. She specializes in detailed processes like mandala patterns, pinstriping, and hand lettering. Her work can be found throughout Fort Worth, from the cacti and succulents painted on the Taco Heads Montgomery Street location to a mural at the Northside Boys & Girls Club. She has worked with local art collectives and organizations such as Art Hunger, Latino Hustle, and Fort Worth Blackhouse.

“As an artist I’ve found meaning in working within the community and trying to make art more accessible and relatable. As a Carter Community Artist, I’m most excited to work with parts of the community that I normally wouldn’t have an audience with, and vice versa.” – Sarah Ayala

Born in Fort Worth, Raul Rodriguez is an artist, curator and publisher. He earned a BFA in Fine Art Photography from the University of North Texas(2014). Since then, he has brought art education experiences to local communities through collaborations with organizations like Leadership Fort Worth, Sunset Studios, Make Art with Purpose, the Dallas Museum of Art, and the Modern Art Museum of Fort Worth. Raul is the founder of the photographic platform Deep Red Press and has curated independently and as part of the Latinx artist collective Latino Hustle. Through these platforms he showcases the work of peers and artists locally and regionally. His own work documents Latino communities, investigating subcultures like skateboarding, boxing, and Lucha Libre, as well as social justice topics inherently linked to the Hispanic community. His photographs reveal the layers and complexity of his heritage and the Mexican-American identity.

“I am a product of the local community in Fort Worth. My goal, as a Carter Community Artist, is to be an example for younger people to envision a pathway for development and a successful future.”
– Raul Rodriguez

Lingchia Tsai is an artist, painter and horticulturalist with a broad interest in arts and crafts, including Taiwanese Indigenous textiles, Native American art, ceramics, and weaving. Lingchia received a BA in Philosophy from the National Taiwan University (2011) and an MFA in Painting from the San Francisco Art Institute (2014). Her work focuses on landscape and abstract paintings, exploring the symbolism of natural elements and the psychological expression of mark-making. Her work is deeply influenced by Chinese poetry and philosophy and has been exhibited in the United States and Taiwan.

“The opportunity to be a Carter Community Artist motivates me to keep the momentum to create, experiment and grow.” – Lingchia Tsai

Originally from Minneapolis, Minnesota, Blake Weld is an interdisciplinary artist whose work blends sculpture, installation, and performance art. He received a BFA from Saint Cloud State University (2011) and an MFA from the University of North Texas (2018). Blake uses everyday objects to create nonsensical kinetic sculptures that embrace the human qualities of both sincere intent and hilarious failure with many of these machines inevitably self-destructing. Blake is currently a member of 500x Gallery in Dallas and exhibits work locally as well as nationally.

“As a Carter Community Artist, I hope to engage with a larger community and to showcase a different side of making art that can be humorous or serendipitous.” – Blake Weld

Located in the heart of Fort Worth’s Cultural District, the Amon Carter Museum of American Art explores the breadth and complexity of American creativity through an important and dynamic art collection. The Carter opened in 1961 to benefit its community by sharing the wonder of American art, fostering the growth of a vibrant cultural spirit, and stimulating artistic imagination. Housed in a building designed by Philip Johnson (1906–2005), the Carter features one of the great collections of American art including masterworks of painting, sculpture, and works on paper by artists such as Georgia O’Keeffe, Jacob Lawrence, John Singer Sargent, Frederic Church, Thomas Eakins, Grant Wood, Alexander Calder and Stuart Davis. The Carter is also home to a world-renowned photography collection that spans the history of the medium from the 19th century to today. It is also home to Amon G. Carter Sr.’s collection of nearly 400 works by Frederic Remington and Charles M. Russell, two of the most significant artists of the American West. Admission is free. Open: Tuesday, Wednesday, Friday and Saturday 10 a.m.–5 p.m.; Thursday 10 a.m.–8 p.m.; Sunday 12–5 p.m. Closed Mondays and select holidays. cartermuseum.org @theamoncarter