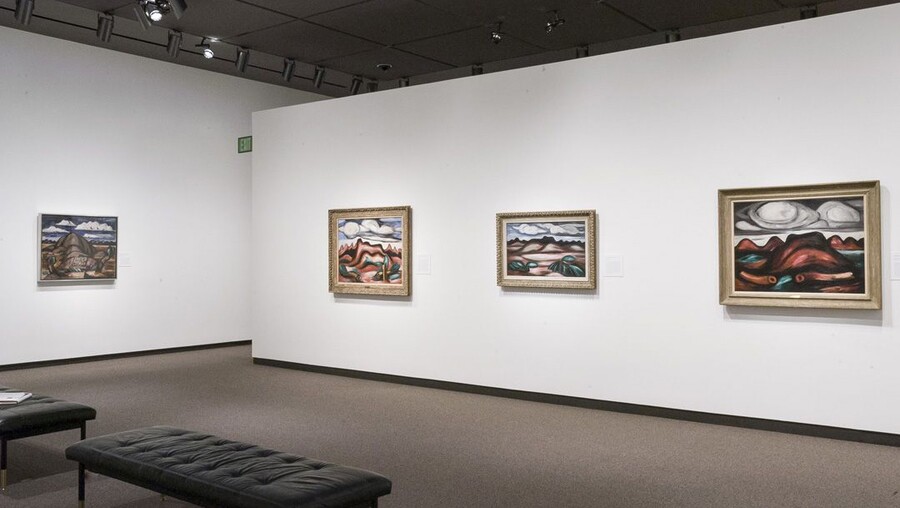 Fort Worth, TX, March 25, 2008—A group of paintings by one of the most brilliant and complicated of all of the American modernists will be on view June 14 through August 24 at the Amon Carter Museum in the special exhibition Marsden Hartley and the West: The Search for an American Modernism. Currently on view through May 11 at the Georgia O’Keeffe Museum in Santa Fe, N.M., the exhibition brings together 38 works from Hartley’s New Mexico years, perhaps the most overlooked and least understood period of his career. Visitors will experience one artist’s personal journey to find something authentically American in the landscape of the West. The exhibition was organized by Heather Hole, formerly a curator at the Georgia O’Keeffe Museum and now a curator of American art at the Museum of Fine Arts, Boston.

Admission to the exhibition is free.

“We are especially pleased to present the extraordinarily powerful landscapes that Hartley painted of New Mexico,” said Rebecca Lawton, curator of paintings and sculpture at the Carter. “He was a restless and experimental artist, continually traveling throughout his career on aesthetic explorations. By going to the Southwest in 1918, he intended to experience nature directly, to work exclusively from his own first-hand experiences, but his ulterior motive was more ambitious: to redefine American art through the depiction of the American landscape. This exhibition provides a rare opportunity to look closely at this complex artist and chart, through the works he created during a six-year period, his progress in achieving his goal.”

Marsden Hartley (l877–1943) was a member of the circle of artists around photographer and gallery owner Alfred Stieglitz, who married Georgia O’Keeffe in 1924. He first became known to Stieglitz and the New York art world in 1909 for his innovative depictions of his home state of Maine. Later, when he was traveling in Europe, Hartley rose to the forefront of the revolutionary experimentations in abstraction taking place in Germany in 1913 and 1914, becoming one of the first American artists to produce avant-garde modernist art on a par with European work. His masterful American Indian Symbols, painted at this time, is a part of the Amon Carter Museum’s collection. World War I forced Hartley to return home in 1915, however, and he began to question European-style modernism because he saw it as the product of a culture that had produced the massive devastation of the war.

Back in New York, Hartley embarked on a mission to create an independent, American modern art that did not draw on European tradition, and he decided to seek this new vision in the West. He arrived in Taos in June 1918 at the invitation of arts patron Mabel Dodge, and began creating spontaneous and naturalistic pastels of the area. Bright and engaging, Hartley’s Taos pastels are some of the most representational works of his entire career. He was ultimately dissatisfied with the artist community he found there and moved to Santa Fe, where his work became less descriptive and more schematic. Hartley also began to experiment with oil paintings based on the pastels. He was still defining a style with which to depict New Mexico in oil paint when he returned to New York in the fall of 1919.

It was there, between 1919 and 1921, that Hartley painted bright, forceful oils of New Mexico. More vigorous than the paintings he executed in New Mexico, these works grew increasingly stylized and imaginative. Although Hartley left the United States again for Europe in 1921, he somehow could not leave New Mexico behind. He began work on the powerful New Mexico Recollections series in Berlin in 1923. These extraordinary pictures are among the most complex and multilayered depictions of the American landscape produced between the wars. When taken as a whole, the tumultuous Recollections depict a landscape of memory and fantasy, closer to a dreamscape than the kind of concrete landscape depicted in the early New Mexico pastels.

“We are excited to be able to present the Hartley New Mexico paintings to the community,” said Amon Carter Museum Director Ron Tyler. “This museum has excellent landscape and modern American collections, and seeing Hartley’s work in this context will enhance the understanding of our collections as well as this special exhibition. Here at the Carter, we also like to present focused exhibitions that allow our visitors to view a particular series of works in depth. Hartley was in New Mexico before Georgia O’Keeffe, and it is fascinating to see how he interpreted the same landscapes that she later made so famous.”

Marsden Hartley and the West: The Search for an American Modernism is accompanied by a publication of the same name that was written by Heather Hole and published by Yale University Press.

Marsden Hartley and the West: The Search for an American Modernism was organized by the Georgia O’Keeffe Museum. It has been made possible by the National Endowment for the Arts as part of its American Masterpieces program, The Burnett Foundation, The Annenberg Foundation, and The Kerr Foundation. The Fort Worth presentation of the exhibition is made possible in part by an anonymous gift.

Saturday, June 14, 11 a.m.
Lecture: Marsden Hartley and the West: The Search for an American Modernism
Heather Hole, assistant curator of paintings, Art of the Americas, Museum of Fine Arts, Boston

At the Amon Carter Museum, visitors can learn about America’s fascinating social and cultural history through great works of art.