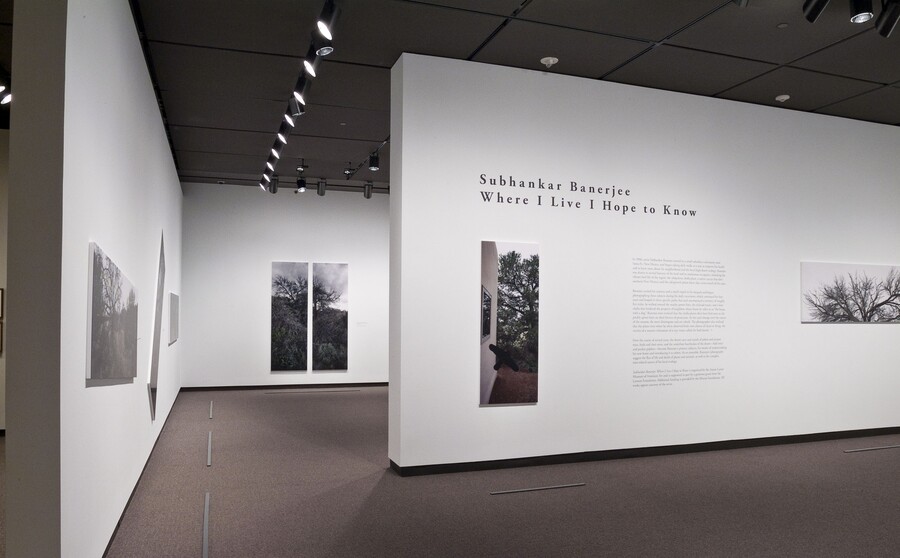 Fort Worth, TX, March 28, 2011—On May 14, the Amon Carter Museum of American Art presents the work of contemporary photographer Subhankar Banerjee (b. 1967) in the exhibition Subhankar Banerjee: Where I Live I Hope to Know. In the exhibition, visitors will see 17 large-scale photographs, some displayed at unusual angles, taken within a 5-mile radius of the artist’s home near Santa Fe, N.M., from 2006–09. The photographs, which serve as poignant hallmarks of the close proximity of global transformation to the artist’s home, are on view through August 28. Admission is free.

During his daily walks around his community, Banerjee used familiar sights, such as the powerline and railroad, to direct his path. He began by photographing the cholla plant, a hearty cactus species that dots the high-desert landscape. After carefully studying his photographs, he began to notice how extensively the cactus is integrated into the region’s thriving ecosystem of birds and underground life. He moved on to making photographs of piñon trees, particularly dead ones, which he learned form the habitats of a vibrant avian population. Finally, he made photographs of the New Mexico skies, the prints themselves serving as petitions for rain.

Densely visual, Banerjee’s cacti and tree photographs offer viewers fascinating and subtle clues about the desert ecosystem. Bird nests are revealed in various states of construction, decay, and reconstruction; small cavities appear in the ground where burrowing animals live and seek sustenance from the root systems above and around them; tiny house finches sit perched in networks of branches; and holes in the trunks of dead trees are revealed as avian homes.

Along with these discoveries, Banerjee learned that the mature piñon forests of northern New Mexico have been dramatically reduced in recent years by a population explosion of bark beetles, an infestation recognized as an acute symptom of global warming.

“This exhibition harmonizes beautifully with our collection of photographs that reflect on the settlement and inhabitation of the western United States from the nineteenth century to the present,” says Jessica May, associate curator of photographs. “It’s my hope that the exhibition allows us to engage in conversation about the relationship of people to western landscapes and to do so in a way that is fresh and revealing.”

Banerjee established his artistic reputation with his outsized color prints of the Arctic, which beautifully portray the extraordinary range of wildlife that thrives in the globe’s far north. While he is firmly indebted to the tradition of fine art photography, Banerjee’s sympathies, like those of Ansel Adams and Eliot Porter before him, are deeply aligned with preservation.

Subhankar Banerjee: Where I Live I Hope to Know is organized by the Amon Carter Museum of American Art and supported in part by a generous grant from the Lannan Foundation. Additional support is provided by the Alturas Foundation. The exhibition is accompanied by a small, limited-edition catalogue designed to optimally present Banerjee’s large prints.

In conjunction with the exhibition, the artist will sign books and speak at a free public lecture on Thursday, June 9, at 6 p.m. Because seating is limited, reservations are required. Please call 817.989.5030 to register. This program is made possible in part by a grant from Humanities Texas, the state affiliate of the National Endowment for the Humanities.