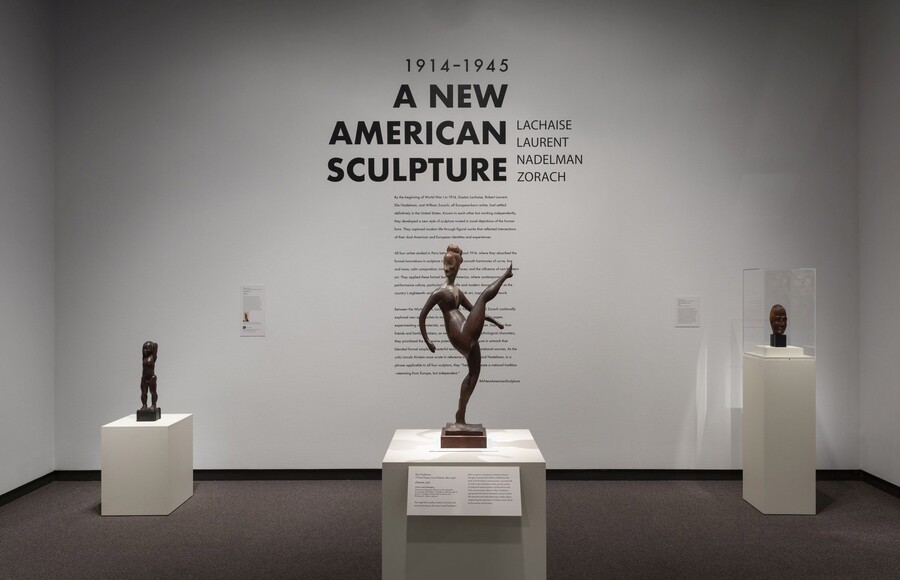 Fort Worth, TX, January 4, 2018—A New American Sculpture, 1914–1945: Lachaise, Laurent, Nadelman, and Zorach features extraordinary masterpieces of modern American sculpture by Gaston Lachaise, Robert Laurent, Elie Nadelman, and William Zorach. This exhibition of 55 sculptures and 20 drawings from public and private collections addresses the remarkable affinities in the work of these four divergent and competitive personalities, who became preeminent figures of modernism in the United States. The exhibition is on view from February 17 through May 13, 2018, and admission is free.

“A New American Sculpture is the first exhibition to investigate the integral relationships between classicism, modernism, and popular imagery in the interwar sculpture of Lachaise, Laurent, Nadelman, and Zorach,” says Andrew J. Walker, executive director of the Amon Carter. “It’s also the first major sculpture show we have exhibited in more than 15 years, and we are proud to be a co-organizer of this new scholarship along with the Portland Museum of Art in Maine.”

Four thematic sections in the exhibition parlay the ideas, influences, sources, and techniques that distinguished these artists’ figural sculptures. Related drawings punctuate each section, as the artists at times employed preparatory sketches for their practice or explored ideas on paper after their three-dimensional works were completed.

The first section, A New Past, explores how these artists paradoxically looked to the past for innovative ideas. They all studied Archaic, Cycladic, Egyptian, Folk, Indian, and Pre-Columbian traditions, as well as African and Oceanic wood carvings. Even though they and their contemporaries labeled these sources “primitive”—a problematic catch-all term that did not distinguish between time periods or cultures—the label implied that these various indigenous traditions were uncorrupted and removed from the artistic conventions of modern Paris or New York. To the four artists, so-called “primitive” sculptures represented a purer, more authentic approach to making art. They each harmonized these different influences with their modernist sensibilities to create unique objects.

Zorach, for instance, recalled poses of Cycladic and Egyptian figures when creating a three-quarter view of his daughter, Dahlov, in The Artist’s Daughter (1930). Yet, the sculptor personalized the work through his direct carving methods, even in the unyielding medium of marble, to reveal Dahlov’s tender features at adolescence. Similarly, Nadelman’s wood sculptures, like Dancer (1918), are reminiscent of the 19th-century trade and shop figures that were part of his personal folk art collection. Despite the historic look of Dancer, the subject was based on vaudeville dancer Eve Tanguay, known at the time for her scandalous high kicks. Nadelman and his contemporaries thus emphasized the importance of historic visual culture for their creation of new forms.

The second section of the exhibition, A New America, examines the four artists’ integration into the country’s rapidly changing society and its shaping of their artwork. As immigrants seeking kinship in the United States, they sought out like-minded modernists. In New York City, they exhibited in avant-garde venues such as Alfred Stieglitz’s 291 gallery and the Whitney Studio Club (now Whitney Museum of American Art). During the summers, they decamped to the rustic art colonies of the Northeast, where they began collecting the American folk art they appreciated for its craftsmanship and directness of expression. Along with the country’s historical artwork, its popular culture, entertainment, and fashion also inspired the artists’ presentation of figures in everyday contexts.

Inspired by his experiences in America, Lachaise created his masterpiece, Standing Woman (1912–17), which represents a mythological and grandiose expression of his ideal woman, his muse and model, Isabel Dutaud Nagle, who would eventually become his wife. With her sinuous lines, the full-figured woman seems to rise effortlessly from the ground, making contact with the earth just at the balls of her feet. The sculpture astonished the critics as an expression of the new possibilities for American art, as they saw in this figure everything from a powerful pioneer woman to a female enchantress.

The third section of the exhibition, A New Technique, examines the four artists’ pioneering technical approaches and methods working with materials like alabaster, bronze, mahogany, and marble. Lachaise and Nadelman, for instance, experimented with electroplating techniques, while Laurent and Zorach were leaders of the direct carving style of American modernism. In cutting directly into a piece of stone or wood, they took inspiration from the physical characteristics of their objects and claimed sole authorship of their artworks. “I think I had the fish then the figure, because I never plan a thing in advance,” remarked Laurent when reflecting on his luminous alabaster The Wave (1926). The artist believed that the transparency of the material gave “life and vibration” to his female nude, who, entwined in waves, evokes one of the Nereids, goddesses of the ocean’s bounty and protectors of fishermen and sailors.

As the fourth exhibition section, A New Movement, reveals, sculpting figures in motion provided a vehicle for Lachaise, Laurent, Nadelman, and Zorach to express the dynamism of 20th-century life in the United States. Themes of circus and theatrical performers, in particular, indicate the artists’ attunement to early 20th-century showmanship when “America became Stageland with a capital ‘S’,” as one critic remarked. Zorach’s towering work, Spirit of the Dance (1932), was most likely an homage to modernist dancer Isadora Duncan, who was a symbol of artistic freedom to the sculptor’s generation. Presenting her as an elegant nude, kneeling at the finale of a performance, Zorach employed sinuous curves to suggest the liberating power of the dance. He first executed an aluminum cast of this work for Radio City Music Hall in New York City (where it still stands today), and then created six full-size bronze casts, one of which is included in this exhibition.

Visitors can connect with 12 artworks throughout the exhibition using a mobile audio tour. Depending on the stop, they can listen to curators or a conservator talk about the artists, their inspirations, techniques, and more. Large print labels, as well as the transcribed audio tour, will be available for use in the galleries.

A New American Sculpture, 1914–1945: Lachaise, Laurent, Nadelman, and Zorach is organized by the Amon Carter Museum of American Art and the Portland Museum of Art, Maine. Government support is provided by National Endowment for the Arts. Foundation support is provided by the Henry Luce Foundation, Inc. and the Terra Foundation for American Art. Local presentation is made possible by the Jill and Charles Fischer Foundation, Dr. and Mrs. Kenneth M. Hamlett, Jr., the Ann L. & Carol Green Rhodes Charitable Trust, Bank of America, N.A., Trustee, Rosalyn G. Rosenthal, and supported in part by a grant from the Arts Council of Fort Worth.

An exhibition catalogue of the same name will sell in the Museum Store for $45 (softcover).

March 29, 6:30 p.m.
Artist Lecture: James Surls
Contemporary artist James Surls will speak about his work, how he started as a sculptor, and the process and materials he uses.