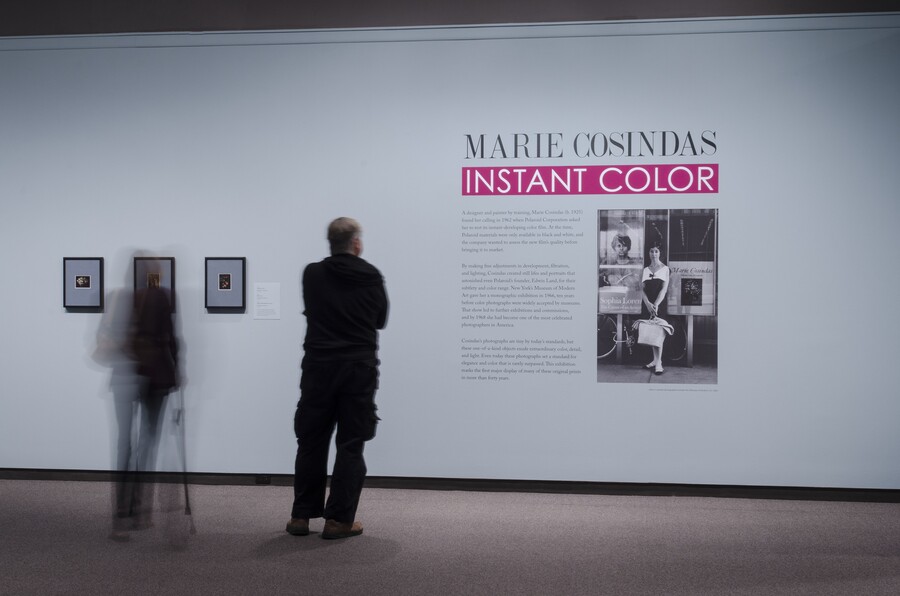 Fort Worth, TX, January 14, 2013—This spring, the Amon Carter Museum of American Art presents two uniquely American looks at the medium of photography—Big Pictures, on view March 5 through April 21, and Marie Cosindas: Instant Color, on view March 2 through May 26.

Big Pictures pulls together 40 works to explore what increased size brings to contemporary photography. Today photographs often reach staggering dimensions, stretching across museum walls to compete with large-scale paintings. “Suggesting a different purpose for the depicted scene, oversized photographs—unlike smaller ones—stop viewers from quickly glancing at the image and instead force them to step back and acknowledge the work and its physical presence,” says Katherine Siegwarth, exhibition curator and Luce Curatorial Fellow for Photographs. “Big photographs command more attention and draw the viewer into their wealth of information.”

Grand-scale photographs are not simply the result of new technologies. Recognizing that producing large prints has been a goal of photographers from the medium’s earliest days, the exhibition features images by Ansel Adams (1902–1984), William Henry Jackson (1843–1942), and Richard Misrach (b. 1949), among others, to offer new insights into the contemporary appeal of large size.

The show reveals that through the 19th century some photographers overcame the inability to make enlargements by using enormous cameras to create large portraits of important public figures, to better celebrate engineering feats, and to more vividly reflect the grandeur of the American landscape. These “mammoth plate” prints are magnificent technical achievements. Understanding their ability to deliver impressive expansiveness and heightened detail, railroad companies often hired photographers, such as William Henry Jackson, to create oversized images of majestic places newly accessible to tourists by train. By the early 20th century, artists like Adams began using enlargements to stake out more of a wall presence for exhibition works, as well as to mirror the grand scale of the vistas he captured in his images.

More recently, photographers have begun to utilize size not to signify grandeur or convey energy, but to make viewers stop, step back, and take a moment to look. Melissa Pinney (b. 1953), for example, creates images that in subject are similar to typical family snapshots in her series Girl Ascending, a meditation on the transition from childhood to womanhood. But by enlarging her photographs—such as Balloons (2004), which is 30 by 37 inches—she delivers the sense of looking through a window, transforming the viewer into a bystander.

Other photographers practicing today use large prints to draw the viewer into the work. These large photographs can break the boundary between the viewer and the image. While Balloons keeps its audience at a distance, Spyder (2006) by Marilyn Minter (b. 1948) directly confronts them in a dramatic fashion. The sitter’s makeup-caked eyelid and lashes create a strange disjointed world. The 50-by-36-inch photograph cannot help but force women to take into account the shared experience of hardening eye shadow and clumping mascara. At this scale, the work not only highlights flaws in society’s ideal of feminine beauty, but drives home the less-than-glamorous reality that commercial fashion shoots airbrush away.

In their oscillation between physical presence and immersion, large photographs deliver a commanding impact that has made them central players in contemporary art. This exhibition explains how they do so and why.

Marie Cosindas: Instant Color, a retrospective developed in collaboration with the artist and organized by the Amon Carter, is composed of 40 of the artist’s vintage, one-of-a-kind Polaroids. These rarely seen works constitute her first major exhibition of these ground-breaking original prints in more than 40 years.

“Cosindas’ prints remain extraordinary due to her unique ability to expand the range and richness of color, beyond what even Polaroid’s own technicians thought possible,” says John Rohrbach, senior curator of photographs. “Still today, her prints offer an elegance and subtlety of color that is rarely surpassed.”

Marie Cosindas (b. 1925) did not intend to be a photographer. The eighth of 10 children in a modestly situated Greek family living in Boston, she studied dressmaking in school and took up a career designing textiles and children’s shoes, also acting as a color coordinator for a company that made museum reproductions in stone. As an avocation, she created abstract paintings filled with atmospheric color.

Cosindas initially considered photography a means for making design notes. But friendships with Boston-area photographers led her in 1961 to take a photography workshop led by Ansel Adams in Yosemite Valley. The following year, when Polaroid sought out photographers to test its new instant color film before bringing it to market, Adams recommended her.

Cosindas took to the film immediately, and within just a few years she was creating portraits and still lifes of such luminosity that when John Szarkowski, director of photographs at the Museum of Modern Art (MoMA), saw them, he was so taken by their beauty that he awarded her a monographic exhibition in 1966, 10 years before color photographs gained artistic acceptance.

Following that breakthrough, Cosindas built a distinguished artistic career founded on Polaroid’s 4-by-5 inch color film. She made portraits of major figures of her time, including images of Coco Chanel, artist Louise Nevelson, Robert Redford, Andy Warhol, and author Tom Wolfe. She also built and photographed elaborate set pieces for advertisers, corporations, and purely for her own enjoyment. Although tiny by today’s standards, her unique prints exude extraordinary color and detail, revealing a painter’s sensitivity to composition and light.

Photographers Dornith Doherty and Misty Keasler discuss the process and subject matter behind their artworks on view. Doherty will speak about Big Bend (2004) featured in the exhibition Photographs from the Collection, and Keasler will discuss Magic Mountain, Payatas Garbage Dump, Manila, The Philippines (2006) featured in the exhibition Big Pictures. Reservations are required, and registration opens February 1. Email visitors@cartermuseum.org or call 817.989.5030 to register. This program is made possible in part by a grant from Humanities Texas, the state affiliate of the National Endowment for the Humanities.

The artist will discuss her life and work during a conversation with the Amon Carter’s Senior Curator of Photographs John Rorhbach. Reservations are required, and registration opens March 1. Email visitors@cartermuseum.org or call 817.989.5030 to register. This program on American art, culture, and society is made possible by a generous gift from the late Anne Burnett Tandy.

Guided tours of Big Pictures occur at 3:30 p.m. Thursday through Sunday. No reservations are required.