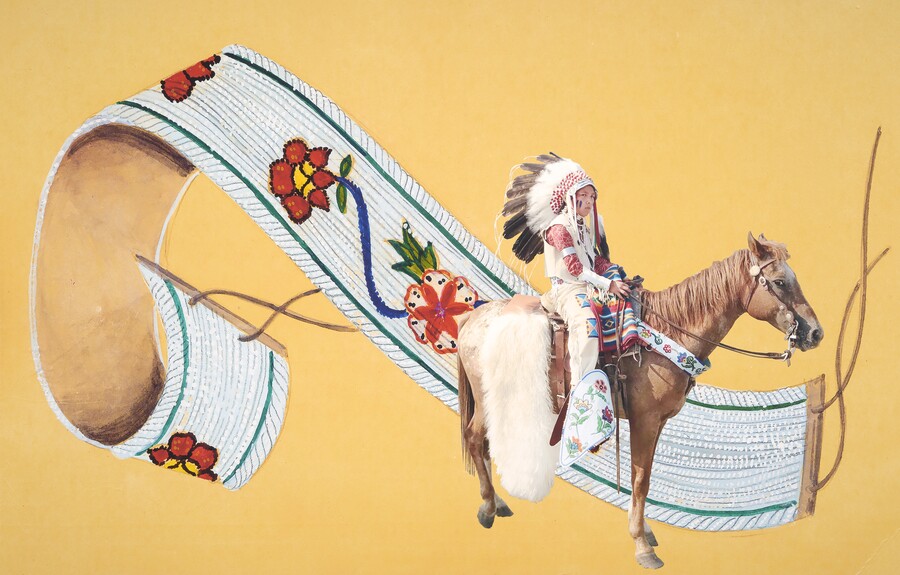 Fort Worth, TX, October 27, 2020—Today, the Amon Carter Museum of American Art announced the acquisition of works by Charles White, Wendy Red Star, Sandy Rodriguez, and Justin Favela, adding significant works by a diverse roster of artists to the museum’s renowned photography and works on paper collections. The acquisitions, a color screenprint and a series of eight lithographs examining minimalism and the Latinx experience by Justin Favela; a 15-print series of montages connecting archival representations of Indigenous people to the contemporary Apsáalooke experience by Wendy Red Star; a large-scale watercolor map tracing children killed in the custody of U.S. Customs and Border Protection by Sandy Rodriguez; and a rare lithograph triptych by Charles White, further the museum’s mission to tell the diverse and wide-ranging stories of artists working in America. These are the first works by Favela, Red Star, and Rodriguez to enter the Carter's collection. Red Star’s Accession also marks the first acquisition purchased through a museum initiative established in February 2020 to expand its photography holdings by collecting the work of contemporary Indigenous artists.

“As an institution that celebrates the rich legacy of artistic creation in America, these important additions to our collection, including the first works by Justin Favela, Wendy Red Star, and Sandy Rodriguez, help complement our existing holdings and tell a broader American story through diverse perspectives,” said Andrew J. Walker, Executive Director. “We are committed to continuing to expand our collection to better reflect the voices and ideas of artists in America, and this initiative to broaden our photography holdings with work by contemporary Indigenous artists is just one example of how we are doing so.”

Archi-props, After Ed Ruscha, 2020 by Justin Favela (b. 1986, American). This set of eight lithographs captures Favela’s opposing reverence for and critique of canonical male artists, a theme he examines throughout his practice, which consists predominantly of ephemeral and site-specific works. This recent print series examines a range of minimalist artists from Donald Judd to Richard Serra to Ellsworth Kelly, referencing pop culture, art history, society, cultural commentary, and his own Guatemalan-Mexican-American heritage. This acquisition follows the Carter’s recent commission and exhibition of Favela’s Puente Nuevo (on view September 2019–November 2020), which is based on historical collection prints by Casimiro Castro.

Aluminio/Hoja I, 2020 by Justin Favela (b. 1986, American). In this color screenprint, Favela examines the correlation between his childhood holiday tamale-making with the aesthetics of minimalists such as Ellsworth Kelly. Utilizing foil and banana leaves, Favela engaged in a screenprinting process of replication—adopting methods historically credited to white male artists to celebrate the artistry of the tamale makers in his family.

Accession, 2020 by Wendy Red Star (b. 1981, American, Crow (Apsáalooke)). This 15-print series of montages blend archival and contemporary imagery of Indigenous peoples. Red Star draws from museum collections to contrast historical representations of Indigenous communities with her lived experience growing up in the Apsáalooke (Crow) reservation in Montana. Accession marks the Carter’s first acquisition purchased through a museum initiative established in February 2020 to expand its photography holdings by collecting the work of contemporary Indigenous artists.

You will not be forgotten, Mapa for the children killed in custody of US Customs and Border Protection, 2019 by Sandy Rodriguez (b. 1975, American). This large-scale, hand-processed watercolor map traces the incidents in space and time across the U.S.-Mexico border where seven migrant children died in U.S. Customs and Border Enforcement Custody in late 2018–19. The amate paper was made by a fifth-generation Otomi paper-making family and is infused with clay from Puebla. Details within the map include references to field studies from Arizona, New Mexico, Texas, and Utah, compiled from Rodriguez’ 17-day journey across over a thousand miles, charting the Pajarito Wilderness near the U.S.-Mexico border.

Love Letter I (1971), Love Letter II (1977), and Love Letter III (1977) by Charles White (1918–1979, American). These three lithographs by White comprise his renowned Love Letter triptych, offering the museum the rare opportunity to be only the second institution in possession of all three works, along with the Art Institute of Chicago. Together, the three works—made over the course of seven years—honor White’s female contemporaries who were central advocates for racial justice, including activists Angela Davis and Fannie Lou Hamer. The love letters represent White’s belief in the courage, strength, and integrity of Black women—utilizing imagery such as the conch to symbolize creativity and dignity. Revealing White’s skill as a draftsman as well as printmaker, these works were featured prominently in the 2018 exhibition Charles White: A Retrospective organized by the Art Institute of Chicago, the Los Angeles County Museum of Art, and the Museum of Modern Art.

The Carter’s photography collection spans the history of the photographic medium, from one of the earliest American daguerreotypes to contemporary inkjet prints by living artists. One of the country’s foremost repositories of American photography, the Carter’s collection of over 45,000 exhibition-quality prints and 250,000 photographic objects reflects the medium’s central role in documenting American culture and history as well as its influence as an art form. In addition to collecting photography prior to its widespread popularity in the art market, the Carter has a significant history of supporting the work of contemporary photographers through collaborations such as the 1979 commission of Richard Avedon’s In the American West series, Chicago-based photographer Terry Evans’ 2013 documentation of Fort Worth’s Trinity River, and Rania Matar’s first solo museum exhibition, In Her Image: Photographs by Rania Matar (2017). The museum is also home to the archives and monographic collections of photographers Carlotta Corpron, Nell Dorr, Laura Gilpin, Eliot Porter, Helen Post, Clara Sipprell, Erwin E. Smith, and Karl Struss.