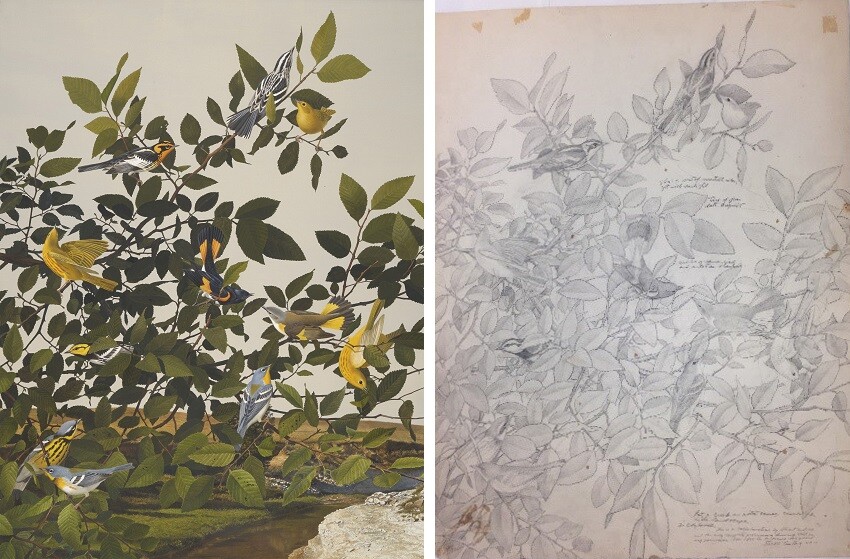 Fort Worth, TX, November 12, 2019—The Amon Carter Museum of American Art presents Tracing the Past: Scott and Stuart Gentling’s Birds of Texas, on view December 7, 2019, through March 8, 2020. Tracing the Past is the second of two exhibitions dedicated to the Gentling brothers’ watercolors of birds that were featured in their 1986 portfolio of prints, Of Birds and Texas. Consisting of 21 original watercolors and drawings by the Gentlings, as well a comparative selection of books and works on paper by prominent artist-naturalists from the nineteenth and twentieth centuries, this exhibition explores how the brothers looked to historical imagery by prior generations of artists to create their own works of Texas birds.

Scott (1942–2011) and Stuart Gentling (1941–2006) paid tribute to their artistic predecessors in their watercolors, carefully selecting, copying, and reworking poses and compositions of birds that they then portrayed against backdrops of Texas landscapes. This purposeful homage to the past situates the Gentling brothers in an established and celebrated tradition of artist-naturalists such as John James Audubon or Alexander Wilson, while also highlighting the originality of their vision and the inventive way they infused uniquely Texan aspects into their works.

“This second installation of work from Scott and Stuart Gentling’s Of Birds of Texas portfolio extends the introduction for many of our visitors to the work by these two prolific Fort Worth artists,” said Andrew J. Walker, Executive Director. “The exhibition also marks the second of three planned exhibitions celebrating the Gentling brothers, which was made possible through a generous gift announced earlier this year to establish the Gentling Study Center and will culminate in the first comprehensive career retrospective of these artists in 2021.”

Tracing the Past presents the Gentlings’ final watercolors alongside source materials, including works by prominent nineteenth- and twentieth-century artist-naturalists, preparatory drawings by the Gentlings, and archival materials such as photographs and sculpture from the Gentling archives. These materials as a whole offer viewers a rare glimpse into the artists’ process, showing how the Gentlings looked to the past to craft their contemporary avian compositions.

“As artists, Scott and Stuart were deeply invested in the past. They wanted viewers to recognize and reflect on the ways that they reused historical imagery in their own art,” stated Spencer Wigmore, Assistant Curator of Painting, Sculpture, and Works on Paper.

Born in Rochester, Minnesota, on New Year’s Eve, 1942, Scott and Stuart Gentling moved with their family to Fort Worth at the age of five. They began collaborating on creative endeavors soon after and became professional artists in their twenties. In parallel careers that spanned more than forty years, the brothers lived and worked together in Fort Worth, where they built a regional and national reputation for their art.

Painted between 1981 and 1985, and later reproduced as a portfolio of prints entitled Of Birds and Texas, the paintings in this exhibition are the result of the brothers’ collaborative approach to art making. Most of the watercolor work was done by Scott, the more prolific of the two artists. But Stuart collaborated throughout, conducting research, designing compositions, making preparatory drawings, and finishing certain works.

Tracing the Past is made possible by recent major gifts. In 2015, Suzanne Gentling, executor of the brothers’ estate, placed their personal papers and diaries at the museum to establish an archive. Recognizing her gift, and committed to cooperation across the Cultural District, the Fort Worth Museum of Science and History subsequently transferred to the Carter its historical collection of paintings, drawings, and study material related to Of Birds and Texas. In addition, major support came from Edward P. Bass, whose vision and leadership inspired the founding of the Gentling Study Center, a research initiative at the Carter dedicated to creating an accessible resource where scholars and the general public alike will be able to experience, research and enjoy the Gentlings’ contributions to the field.

Tracing the Past opens to the public on December 7. The museum will celebrate the exhibition on November 14 as well as on February 1, 2020, with Flights of Fancy, an event including a curatorial talk in the galleries and beer tasting from a local brewery. Tickets are free for Carter members and $10 for nonmembers. For dates, prices, and details, visit cartermuseum.org.

Tracing the Past is organized by the Amon Carter Museum of American Art and will be featured in the new Works on Paper gallery on the mezzanine level, which was unveiled this past August and is dedicated to exploring the Carter’s works on paper collection. There are nearly 10,000 drawings, prints, and watercolors in the museum’s holding. Every few months, the Carter will delve into a different aspect of these objects, revisiting old favorites and unearthing hidden gems. Tracing the Past is an introduction not just to Scott and Stuart Gentling, but to the depth and breadth of works on paper at the Carter.

About the Gentling Study Center

The Gentling Study Center is established in recognition of the pioneering spirit of two of Fort Worth’s most notable artists, brothers Scott G. and Stuart W. Gentling. The Center is housed in a new collections Study Room alongside the museum’s esteemed research library, creating an accessible resource where scholars and the general public alike will be able to experience, research and enjoy their contributions to the field. With the vision of securing the Gentlings’ rightful place among the foremost American painters of the last half of the twentieth century, the Gentling Study Center endows yearly fellowships supporting intensive ongoing research and scholarship, drawing upon the museum’s deep monographic resources within the library, archives, and art collections. The new initiative complements the museum’s major collection of artist archives, advancing the Carter as a premier research institution in the field of American art. Alongside this fellowship and the Gentling Study Center, Tracing the Past: Scott and Stuart Gentling’s Birds of Texas represents the Carter’s efforts to raise the profile of local American artists on a national level and make their legacy accessible to the public.

Located in the heart of Fort Worth’s Cultural District, the Amon Carter Museum of American Art explores the breadth and complexity of American creativity through an important and dynamic art collection. The Carter opened in 1961 to benefit its community by sharing the wonder of American art, fostering the growth of a vibrant cultural spirit, and stimulating artistic imagination. Housed in a building designed by Philip Johnson (1906–2005), the Carter features one of the great collections of American art including masterworks of painting, sculpture, and works on paper by artists such as Georgia O’Keeffe, Jacob Lawrence, John Singer Sargent, Frederic Church, Thomas Eakins, Grant Wood, Alexander Calder, and Stuart Davis. The Carter is also home to a world-renowned photography collection that spans the history of the medium from the nineteenth century to today. It is also home to Amon G. Carter Sr.’s collection of nearly 400 works by Frederic Remington and Charles M. Russell, two of the most significant artists of the American West. Admission is free. Open: Tuesday, Wednesday, Friday, and Saturday 10 a.m.–5 p.m.; Thursday 10 a.m.–8 p.m.; Sunday 12–5 p.m. Closed Mondays and select holidays.