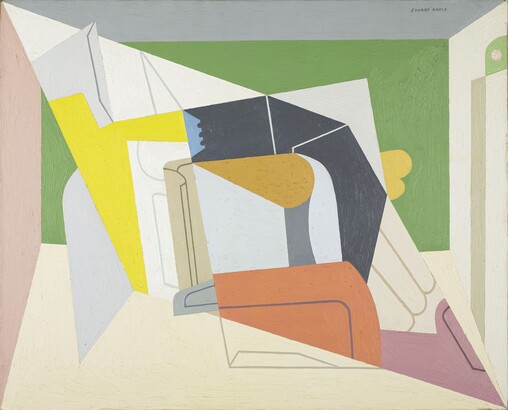 From 1927 to 1928, Davis created a landmark group of four paintings known as the Egg Beater series. Nailing an electric fan, a rubber glove, and an eggbeater to a table, he worked exclusively from the still-life subject matter, devising a style based on cubist principles of fragmenting three-dimensional objects into two-dimensional forms.

In Egg Beater No. 2, the second work in the series, Davis fused the still-life elements within a diamond-like central shape in a palette of pastel colors. The ordinary household objects become unrecognizable as vigorous patterns of intersecting, flat, geometric forms. The series, and this work in particular, earned Davis renown as one of America’s most avant-garde artists.

Students will create an abstract still-life. Pose objects on a flat surface in front of students. Each student begins by dividing their paper into four parts by drawing one line down the center horizontally and one line down the center vertically. Students will then pick one object to draw four times in four different ways. Encourage students to think about textures, lines, and basic shapes.

Additional details
Location: On View
Part of the Paintings