A Dash for the Timber

Between 1885 and 1888, Remington made several trips to the Southwest to document the Apache Wars. He was deeply influenced by the stark landscape there and filled his sketchbooks with color notes and observations about the special quality of the light.

Back in his studio in 1889, he wrote a friend to say he needed a few pairs of chaps sent to him for source material because he was working on this painting—“a big cowboy picture”—which launched his career when it received favorable critical attention. The overall effect of the composition is truly cinematic, and the action-filled portrayal of the struggle of life anticipates the many western films that were to follow a generation later.

Students will explore motion in art by using only lines to draw the movements seen in the painting (wavy lines for gallop, forward slash for leaning, spiral for turning cowboy).

Students will explore beginning, middle, and end in narratives. They will imagine they are one of the people in this painting. Using carefully chosen words, they should describe their adventurous day to a friend.

Show a photograph of Fredric Remington and drawings he made of horses. What is important about the horses in this painting? Share motion studies (or a flip book) of horses by Eadweard Muybridge.

On 2 x 12 in. paper, students can create a series of drawings depicting movement. 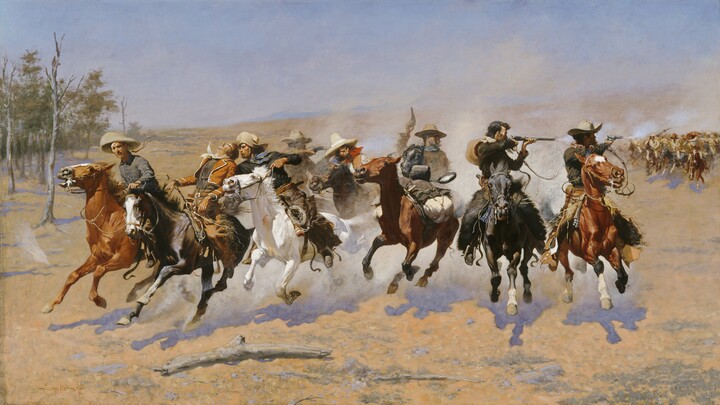