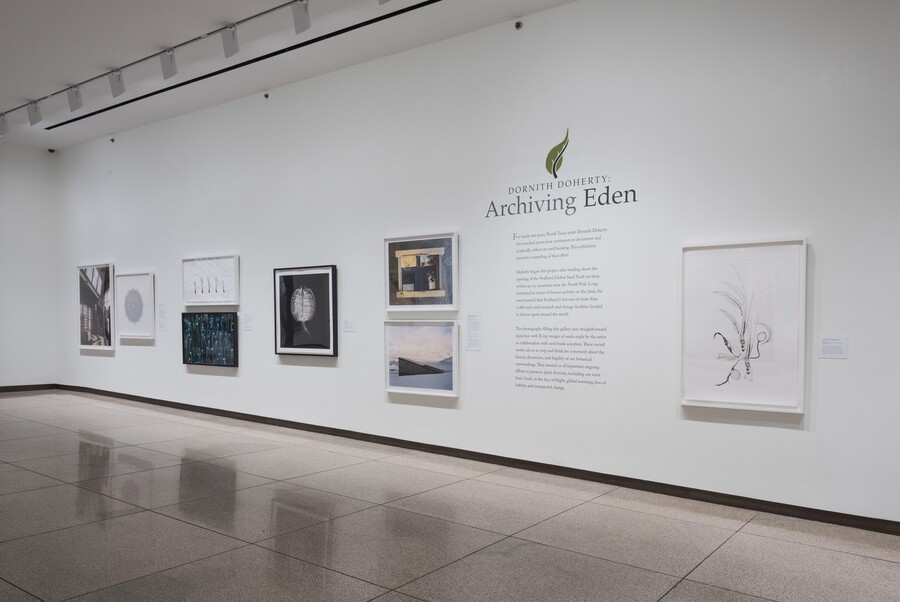 For nearly 10 years, Doherty traveled the world from Australia to Russia photographing seed banks, which are designed to preserve the world’s crops and plants against species loss brought by blight, development, global warming, pests, unexpected change, and war. Long interested in how humans shape the land, Doherty took it upon herself to explore seed vaults and the activities of their research scientists. Starting with a stop at the Lady Bird Johnson Wildflower Center in Austin, Texas, she visited key facilities across five continents, including the Svalbard Global Seed Vault, just south of the North Pole on the Norwegian island of Spitsbergen. Svalbard is one of more than 1,700 seed banks across the globe, but it is special because it houses duplicate seeds from other vaults to serve as a backup in case of a natural or manmade disaster. Because of its location, Svalbard is better positioned to withstand the potential aftermath of global warming or other manmade global disasters.

Besides documenting the appearance of these vaults, the artist created X-rays of a wide array of plant seeds with the assistance of scientists. Doherty then transformed the X-ray images into poetic odes to protecting the world’s botanical diversity.

“The artist used a variety of photographic approaches to create these remarkable images that symbolize biodiversity loss,” says John Rohrbach, senior curator of photographs. “A 7-foot-high lenticular construction showing X-rays of 1,400 ash tree seeds collected by the National Center for Genetic Resource Preservation in Fort Collins, Colo., reflects the ongoing decimation of ash trees across North America by the ash tree borer. Her array of five banana-seedling clones illustrates scientists’ race to develop a new banana strain to replace our standard grocery store version, which may soon be lost to blight.”

Rohrbach says some ecologists suggest that Earth is losing more than 10 animal and plant species each day, and he hopes visitors will ponder the plight of plants across the globe and in their own backyards.

“The exhibition asks us to consider the ongoing work of scientists and volunteers who work, far behind the noise of our daily newsfeeds, to protect earth’s botanical diversity,” Rohrbach says. “It is a call to reflect on the beauty, variety, and most of all, the fragility of our world’s plant life.”

Dornith Doherty: Archiving Eden was organized by the Amon Carter Museum of American Art. A book of the same name accompanies the exhibition and will be sold in the Museum Store.

The artist will present a free lecture and booksigning at the museum on November 4 at 10:30 a.m. This program on American art, culture, and society is made possible by a generous gift from the late Anne Burnett Tandy.

A 2012 Guggenheim Foundation Fellow, Doherty was born in Houston, graduated cum laude with a Bachelor of Arts from Rice University and received a Master of Fine Arts in Photography from Yale University. She currently resides in Southlake, Texas, and is a Distinguished Research Professor at the University of North Texas, where she has been on the faculty since 1996. In addition to the Guggenheim Fellowship, she has also received grants from the Fulbright Foundation, Houston Center for Photography, Indiana Arts Commission, Japan Foundation, United States Department of the Interior, and University of North Texas. In 2016, the Texas Legislature named her a Texas State Artist. Doherty’s work is in numerous permanent collections, including the Amon Carter Museum of American Art, Crystal Bridges Museum of American Art, Bentonville, Ark.; Minneapolis Institute of Art and The Museum of Fine Arts, Houston.