October 27, 2022 The Amon Carter Museum of American Art Announces Presentation of Faces from the Interior: The North American Portraits of Karl Bodmer 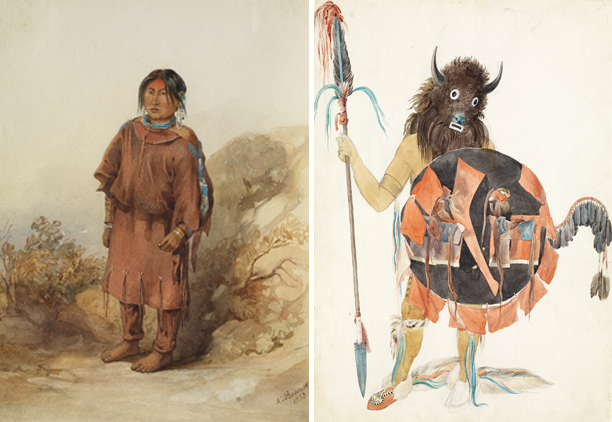 Fort Worth, TX, October 27, 2022— The Amon Carter Museum of American Art (the Carter) is proud to present Faces from the Interior: The North American Portraits of Karl Bodmer. The exhibition, on view October 30, 2022 through January 22, 2023, follows the travels of Swiss draftsman, Karl Bodmer, as he traveled with German naturalist Maximillian, Prince of Wied-Neuwied, along the Missouri River in 1833-34. During the journey, Bodmer created watercolor portraits of many of the Indigenous people that he encountered, including members of the Omaha, Ponca, Yankton, Lakota, Mandan, Hidatsa, Assiniboine, and Blackfoot. Organized by the Margre H. Durham Center for Western Studies, Joslyn Art Museum, Omaha, NE, Faces from the Interior showcases a selection of Bodmer’s portrait watercolors, some of the earliest European artworks to portray these communities’ leaders, lifeways, and homelands. The exhibition also includes label texts and a series of short films featuring Indigenous scholars, artists, and elders who interpret the portraits and reflect on their relevance and importance in the present-day.

“The Carter is pleased to present Faces from the Interior: The North American Portraits of Karl Bodmer, the first major exhibition to focus on Bodmer’s portraits of Indigenous peoples by our colleagues at the Joslyn Art Museum,” stated Andrew J. Walker, Executive Director. “Karl Bodmer’s artworks are an invaluable record of the Missouri River and its inhabitants at a pivotal historical moment. We are committed to presenting artistic works from Euro-American exploration and this exhibition strengthens our study of Indigenous portraiture.”

During the early 1830s, the Prince of Wied-Neuwied, Maximillian, hired Swiss draftsman Karl Bodmer to travel with him from Saint Louis to the northwestern reaches of the Missouri River, a round trip of nearly 2,500 miles. On their expedition, they visited a number of Native American nations–largely unknown to non-Native people beyond trappers and traders–in order to reveal what Maximillian called “the natural face of North America.” In perceptive and compelling portraits, Bodmer captured the likenesses of specific individuals that he met and spent time with. His attentiveness to Indigenous protocols, combined with his acute sensitivity of observation and his subtle, refined brushwork, resulted in works that offer an unparalleled level of visual detail. These details matter; every beaded design, carefully arranged feather, and painted robe carries meaning and tells a story. Bodmer’s pictures record the complexities of cultural encounters at a time when Euro-American settler colonization introduced disease, depleted natural resources, and led to the forcible removal of Indigenous peoples from their homelands.

“This show isn’t just about the exploits of Bodmer and Maximilian; it’s about the dynamic, multicultural world that they encountered as visitors and guests in Indigenous homelands,” said Spencer Wigmore, Associate Curator of Paintings, Sculpture, and Works on Paper as well as the curator of the Carter’s presentation. “Joslyn’s team is changing the conversation around this history, foregrounding Indigenous voices and perspectives and inviting visitors to consider Bodmer’s importance from different points of view.”

Faces from the Interior: The North American Portraits of Karl Bodmer features over sixty watercolors, including portraits, landscapes, and field sketches. The portraits include individuals from the Omaha, Ponca, Yankton, Lakota, Mandan, Hidatsa, Assiniboine, and Blackfoot nations. among the many encountered by Bodmer and Maximilian. The exhibition will also present a selection of Bodmer’s Missouri River landscapes and field sketches, as well as portraits attributed to the Mandan man Sih-Chidä (Yellow Feather) and the Mandan chief Mató-Tópe (Four Bears). Collectively, these paintings reveal the dynamic cultural exchanges that made up artistic production of this time.

Additionally, the exhibition includes four commissioned short films–contemporary portraits that testify to the enduring power of Bodmer’s images. Personal stories shared in these films illuminate generations of Indigenous teachings that bridge historical and contemporary featherwork and beadwork, dancing, tribal histories, and traditional ecological knowledge. The Carter will be celebrating Faces from the Interior throughout the run of the exhibition. Visit cartermuseum.org/Faces for details and dates.