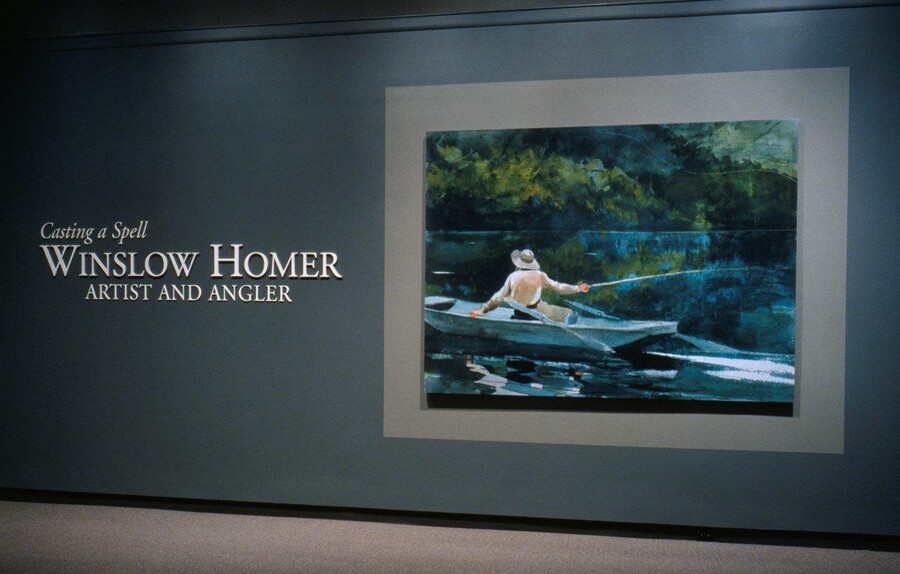 Fort Worth, TX, February 11, 2003—The Amon Carter Museum presents Casting a Spell: Winslow Homer, Artist and Angler April 12 through June 22, 2003. Winslow Homer (1836–1910) is arguably the greatest artist in watercolor that America has yet produced. The medium was his passion, and he used it to capture scenes from his other lifelong love: fly-fishing. Now, the Carter offers a rare opportunity to see fifty-three of these breathtaking works together in one place.

Infused by Homer's appreciation and understanding of this part of the sporting world, these lucent and atmospheric paintings not only convey the dynamics of the sport but also celebrate its attendant aesthetics, from the beauty of the natural world to the elegant skill that is inherent to the practice of fly-fishing.

The Carter is one of only two venues for this special exhibition, which opened at the Fine Arts Museums of San Francisco on December 7, 2002. Many of the works that will be on view have resided in private collections since Homer painted them and have not previously been seen by the public. This fact, coupled with the inherently delicate nature of watercolors, makes this exhibition a once-in-a-lifetime chance to see these works together.

Co-organized by the Amon Carter Museum and the Fine Arts Museums of San Francisco, where it was conceived, Casting a Spell was curated by Patricia Junker, the Carter's curator of paintings and sculpture. Junker, whose four years of research yielded the locations of many of the previously unseen works, describes the endeavor as, "fascinating research combined with a good measure of detective work and luck that sometimes involved gleaning from one collector the whereabouts of other works. The fact that a number of these highly appealing paintings have heretofore always hung in people's homes makes it doubly exciting to be able to include them in the exhibition."

Homer's fishing pictures are immensely varied and span his entire career. It was fishing that took Homer to the many different locales with which his name is now associated. His favorite fishing venues were found in the Adirondacks in northern New York State, in Florida, and in the Canadian Province of Quebec. Each of these distinctive regions elicited unique and strong reactions from the painter, taking form in works that are brilliant studies of light, atmosphere, and the spirit of place. He worked in the traveler's medium of watercolor, stretching it ever more boldly and unconventionally in order to convey the intensity of his experience of nature and his feeling for the physical and psychological demands of his favorite sport.

Homer's fishing paintings are an important and little-understood aspect of his art. They naturally served as a counterpoint to all the artist's other work, especially in the decades of the 1880s and beyond, when fishing represented a regular and sustained activity for Homer. His fishing expeditions offered recreation, rejuvenation, solace, and camaraderie, which spurred his imagination. The intense visual experience that is fly-fishing afforded Homer a close involvement with nature's mysterious details, revealing to the artist new worlds of color, form, and dynamism.

Admission to Casting a Spell: Winslow Homer, Artist and Angler is free. The exhibition is accompanied by an illustrated catalogue (240 pages, 184 illustrations, 123 in color) with essays by Patricia Junker, Sarah Burns, Paul Schullery, Theodore E. Stebbins Jr., David Tatham, and William H. Gerdts. It is published by the Amon Carter Museum and the Fine Arts Museums of San Francisco and is distributed by Thames & Hudson. The price is $45 for the hardcover and $24.95 for the softcover.

Casting a Spell: Winslow Homer, Artist and Angler is co-organized by the Amon Carter Museum and the Fine Arts Museums of San Francisco. The presentation of the exhibition in Fort Worth is made possible in part by generous grants from The Eugene McDermott Foundation, Dallas, Texas; and The Garvey Texas Foundation, Fort Worth. The exhibition catalogue is generously supported by Burgess and Elizabeth Jamieson.

The Star-Telegram is the official print sponsor of the Amon Carter Museum.