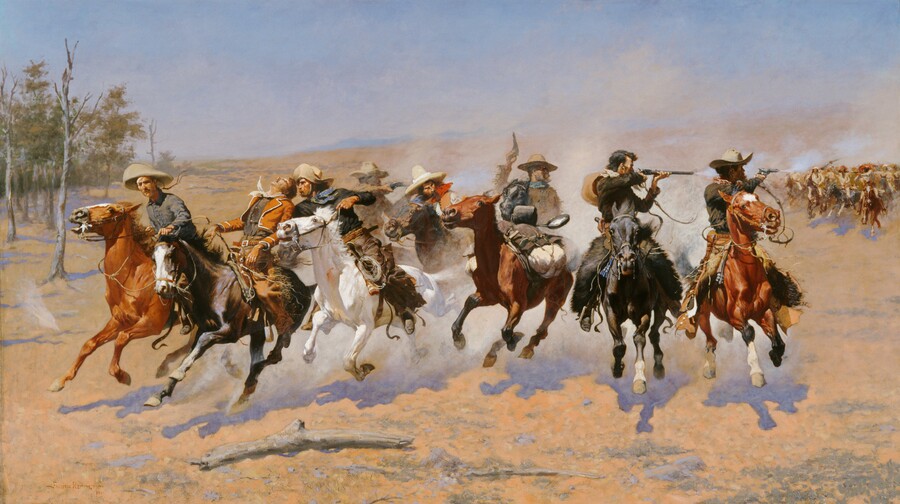 Fort Worth, Texas, September 24, 2020—The Amon Carter Museum of American Art (the Carter) is proud to present Mythmakers: Winslow Homer and Frederic Remington, an exhibition that reveals unexpected resonances and moments of convergence between common themes, artistic sensibilities, and techniques used by acclaimed American artists Winslow Homer (1836–1910) and Frederic Remington (1861–1909) through more than 60 artworks. Mythmakers is organized by the Carter, the Denver Art Museum, and the Portland Museum of Art, Maine, and will be on view at the Carter from December 22, 2020, to February 28, 2021, concluding the exhibition’s national tour.

Born a generation apart, Homer and Remington were celebrated in similar ways by turn-of-the-century critics for uniquely capturing the quintessential American spirit of the period. This exhibition reveals how both were a product of their context creating a sense of nostalgia in the face of the ravages of war, the displacement of Native people, and the rise of industrialization that they felt challenged traditional modes of masculinity and an imagined simpler past. While both artists achieved popular recognition during their lifetimes that has continued long after their deaths, the parallel mythologies surrounding these two artists have never been considered in depth due to the perceived differences in their subject matter.

“The dedication to the continued scholarship and exploration of American art is a core tenet of the Carter’s exhibition program,” stated Andrew J. Walker, Executive Director. “Mythmakers not only examines these two celebrated American artists presenting new ways in which we as the audience engage with their work, but it also further establishes the Carter’s position in the research and presentation of the foundations of American art."

Bringing together famous works that rarely travel from museum collections across the country, Mythmakers compares and contrasts the artists’ iconic works, representing some of their best-known subjects while also focusing on underexplored aspects of their shared experiences within the broader context of events that shaped U.S. history. The works are further examined by experts outside the realm of art history, lending a critical lens to the investigations of the two artists, including audio and label content provided by a war veteran, photojournalist, several contemporary artists, the renowned historians, of Black cowboys and the origins of country music Dom Flemons, artist and former rancher Matt Kleberg, veteran organizer Doug Rawlings, and members of both the Mi'kmaq and Comanche Nations.

“While there is much to appreciate about the technical virtuosity of the collection of world-famous works assembled in this exhibition, there is also much to discuss in terms of the narratives each artist chose to perpetuate,” says Maggie Adler, Curator of Paintings, Sculpture, and Works on Paper at the Carter. “The exhibition starts with situating the artists in their historical context—as observers of the horrors of war and Native displacement, as urbanites with a hankering for experiences with nature lost to them in city life, as savvy brand managers, and as people approaching the brink of modernity with some anxiety. The title Mythmakers refers both to the myths surrounding these two artists’ reputations as well as the artistic license they used in representing the world around them, or worlds that were no longer in existence.

Organized thematically and chronologically, each section will feature key works displayed in one-on-one pairings, encouraging visitors to draw connections between the artists and the themes presented. The exhibition is organized into five sections:

Mythmakers: Winslow Homer and Frederic Remington was awarded a $300,000 grant under the National Endowment for the Humanities’ “A More Perfect Union” initiative, which supports efforts to promote a deeper understanding of U.S. history and culture, and to advance civics education in preparation for the nation’s 250th anniversary in 2026. The exhibition is one of the 224 humanities projects honored with this gift.

Mythmakers is co-curated by a team of four curators, including the Carter’s Maggie Adler, Curator of Paintings, Sculpture, and Works on Paper; Diana Greenwold, Associate Curator of American Art at the Portland Museum of Art; Jennifer Henneman, Associate Curator of Western American Art; and Thomas Brent Smith, Curator of Western American Art and Director of the Petrie Institute of Western American Art at the Denver Art Museum. The national tour sponsorship is generously provided by Bank of America. This exhibition is supported by an indemnity from the Federal Council on the Arts and the Humanities; by the National Endowment for the Humanities: Exploring the human endeavor; and by the Wyeth Foundation for American Art. The Carter’s presentation of Mythmakers is generously supported by the Mr. and Mrs. Raymond J. Horowitz Foundation for the Arts, the Texas Commission on the Arts, and the Alice L. Walton Foundation Temporary Exhibitions Endowment.